She says that her difference starts by being transparent about as much as she can.

Increasing transparency and revenue are her two top goals. Transparency will be a priority, she said, and will extend from the president’s office to all students, faculty and staff. Drinan was even transparent enough to talk to Loquitur Media reporters just a day after the news broke of the incoming interim president.

“I’m a big advocate of transparency around finances, around admissions, around everything that really contributes to good decision making,” Drinan said. “The state of the business of Cabrini is a shared obligation. What is the state of things at Cabrini is not shared with the decision-makers and what I mean by decision-makers, I mean everyone that participates in decision making about the future of Cabrini so that’s students, that’s faculty, that’s staff and to some extent that’s alums.”

This transparency is something that many students appreciate.

Public financial documents show that the financial situation of Cabrini is not in a good state right now, as the university is millions of dollars in debt. Drinan said she is going to be looking for ways to grow revenue. Drinan doesn’t plan on doing this by raising the tuition. Instead, she has some other plans.

“I am always on the hunt for opportunities to create non-tuition revenue, because if you’re a tuition-based university, what you want is tuition,” Drinan said. “The idea of growing revenue, I think, is very important to see how we can apply that at Cabrini because it is much more fun, exciting and gratifying to grow revenue as opposed to cut expenses.

Drinan plans to come in with a big question on her mind to help generate some money for the university:

“Where are the hidden gems at Cabrini that could be turned into something that is other than tuition revenue and start the process of diversifying revenue?”

At Simmons University, Drinan helped revamp its graduate school to add to the online program and make it much more accessible to those pursuing higher degrees. It grew the program from 500 graduate students to 4,000 students, she said. Simmons University, located in Boston, Massachusetts, is a nationally ranked women’s college with 1,500 employees. Before she retired, Drinan served as president there for 12 years, from 2008-2020.

“I’ve been married to my husband for 54 years. We met in high school and married at the end of our junior year in college, we have three grown children and six grandchildren and we have a dog that is the center of our life, and he will be joining us at Cabrini,” she said. “So, he hopefully will be the Cabrini dog for the year.”

“My life is very informed by being a parent, and I think I’ve benefited as a leader and a manager from being able to see that perspective.”

Drinan may not be at Cabrini for too long. She will remain president until a permanent president is found. She is determined in her short stint to make Cabrini be the best it can be. News of Drinan’s hire came late Friday afternoon by Amy Lambert, chair of the board of trustees. She begins her position May 23, the day after the university’s 2022 Commencement.

“My number one job is to work hard with everyone on campus to ensure that Cabrini looks like the most fabulous opportunity in the world for the new president. I want the search committee and the search firm to be able to show a community that is really engaged, hard-working and having fun being at Cabrini.” 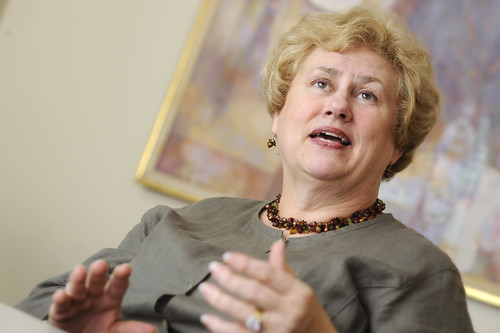 “I know what critical difference the leader can make. I know I am going to be the leader for a year, and I am going to do everything I can to make a lot of difference, but my biggest contribution would be making certain that Cabrini is so appealing to a field of candidates that you almost can’t choose between the best ones.”

Drinan was selected by the interim president selection committee, which is headed by board of trustees member, Eric Tidwell (’96). Dr. Paul Wright, faculty assembly chair, also served on the committee.

Wright said, “The interim president search committee, on which I was proud to serve on behalf of faculty, found in Helen Drinan an accomplished and energetic leader uniquely suited to this moment in Cabrini’s history. As Cabrini is facing financial challenges similar to those faced by small liberal arts institutions across the country. Helen’s gifts as a fiscally-minded administrator are nicely complemented by her authentic commitment to liberal arts education in mission-focused schools like ours. Helen will bring a responsive and yet decisive leadership style to campus.

“It is a rare thing for a committee like ours and for other stakeholder feedback to be so unanimous in preferring one candidate for such a role, but Helen was our clear choice,” Wright said.

While at Simmons, Drinan achieved many accomplishments, a couple of which are similar to outgoing President Donald Taylor’s. As president, Simmons achieved university status, simplified its academic structure to enhance interdisciplinary study under four colleges, welcomed the school’s two largest freshman classes in its history and reconfigured its undergraduate curriculum around leadership development.

“I am thrilled to have the opportunity to lead Cabrini University while we search for the next president, and my husband David and I, along with our dog Kipper, are delighted to join the university’s vibrant residential community,” Drinan said in the announcement.

Not only is Drinan thrilled to be at Cabrini but students are optimistic as well, hoping that her past experience will help her at Cabrini.

Off the back of two tough years without many on-campus events and financial troubles, students are open to a fresh start and new ideas in the president’s office. In the short time since the announcement, students seems to be very optimistic and willing to give the new president a shot with open arms and welcome her to the Cabrini community.

Liam Glenane, freshman business major, said, “I hope she takes the school in the right direction. I’m very optimistic, especially when I looked at her prior experiences.”

“Her experience speaks for itself. I hope she looks to do what is best for the students, while also improving the university as a whole,” Yamar Cox-Mason, sophomore business major, said.

Overall, there is a sense of optimism and hope around the Cabrini community over the selection of Drinan as the interim president.

Along with that optimism is also a hint of skepticism from some students and staff. Staff who has been through multiple president changes in the past warn against being too confident or over-optimistic because presidents can say anything to make them look good.

In the end, it is all about action, and only time will tell whether the new leadership will pave a successful road forward for Cabrini.